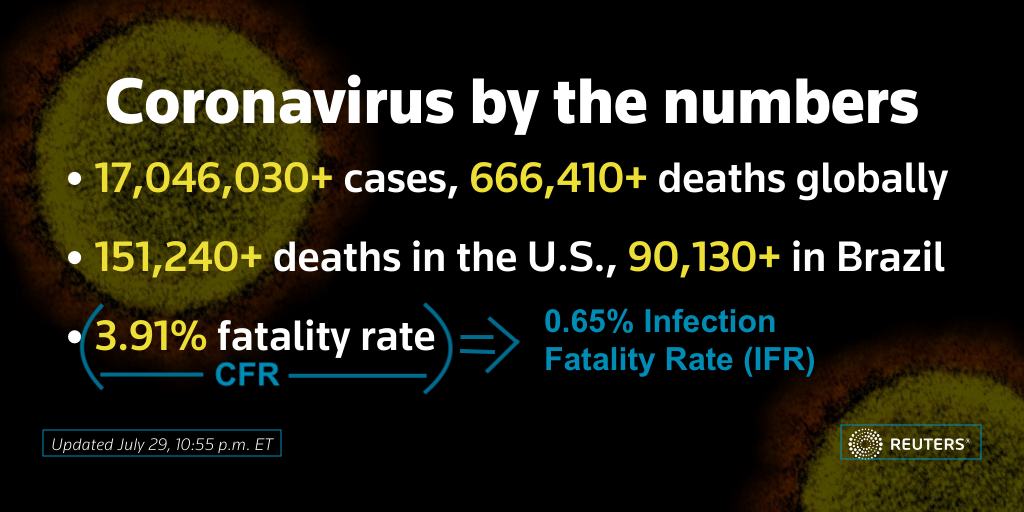 For several months, I'm upset [tweet thread] about COVID19 coverage, and in particular about COVID19's figures of mortality. There's been lots of confusion everywhere (politicians, journalists, and general public) about how deadly COVID19 is.

Today, while checking socials I noticed that Reuters' Tweet line reports case fatality rate (CFR) as one of the important facts to know about COVID19. Meanwhile, Reuters does not mention infection fatality rate (IFR), which I believe is the statistics to communicate on.

Case fatality rate (CFR) answers: Given I’m a TESTED, how deadly is COVID19?

At first it sounds accurate, especially because agencies are reporting this number everywhere. In fact, it's an “easy-to-compute” number that (only) requires: (a) to count the number of reported deaths, (b) to get the number of diagnoses escalated by the testing facilities, and (c) to form the ratio (CFR, i.e., c = a / b). But it’s not because it’s easy to calculate that it's relevant, especially for the general public that Reuters (and others) have for mission to inform. In fact, I even think that CFR is highly misinforming. Instead, the infection fatality rate (IFR) is relevant and informing.

Infection fatality rate (IFR) answers: Given I’m am EXPOSED (and I’ve been TESTED OR NOT), how deadly is COVID19?

It requires (a) to count the number of deaths attributed to COVID19, (b) to estimate the number of people infected in the general population; and (c) to form the ratio (IFR, i.e., c = a / b). As compared to CFR, IFR does not limit itself to the population of people who’ve been tested, but instead it applies to everyone that gets exposed, even those who did not get tested yet — for whatever reason, i.e., no testing facility nearby, asymptomatic so far, diagnosis failure (false positive), etc..

Put differently, IFR informs you and me that if we get that virus our likelihood of dying is IFR=0.3 - 1%. In the opposite, CFR (~4%) would not be a metric that applies to you and I, so long as: (1) we do not get tested, (2) that this test gets positive, and (3) that this test gets correctly recorded by the national health agencies…

Because of this, I think that CFR should be reserved to epidemiologists, epidemic-statistics professionals, or public health decision makers (if they are next to statistics expert who explain that number’s context). Instead, IFR is of general interest and should be reported at large to the population and the decision-makers. IFR is easy to understand and I think that:

For many, when they read CFR, they assume IFR, which is the misinforming part.

Journalists (from Reuters, AFP, or else) have a role to not let their readers get misinformed. As mentioned, it’s a 600% error… it’s a bit as if we told people that the population of the United States was 2 billion when it's 320 millions…

Now, the trick is that IFR requires estimating to account for the part of the information that we can not measure, i.e., all those who aren’t tested. And they're many (!) since for every person tested positive (N=1), the CDC, other agencies, and our common sense tell us that there’re 5 to 10 persons (here’s our 6x!) who aren't tested but COVID19-positive, i.e., EXPOSED. If 6 out of 7 COVID19-positive people are untested, that means 6/7=85% of the exposed people haven’t been tested yet—cf. illustration.

In reality, it’s not necessary to wait for additional estimates of IFR, because early on we have had opportunities to get such estimates from South Korea's mass-testing and from the Diamond Princess (for which we've had almost complete information over a subpopulation), and in these two examples the mortality rate (IFR) was 0.3 - 1%. To conclude, I think:

CFR figures shouldn't be relayed (or in small) and that IFR should be used instead.

Why should you trust? Because as a Ph.D. and an independent consultant in epidemio-statistics, my job is to calculate these things, including the mortality rates (IFR).